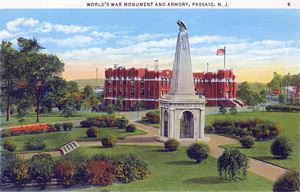 The Armory Building served Passaic, and its now defunct, National Guard Unit, from the mid-twenties until the mid-60s, went it was demolished to make way for Route 21. The Cenotaph monument in the park, was dedicated on May 30, 1924 (see Pershing photo (JPG)) as a memorial to those Passaic individuals who made the supreme sacrifice for their country in The Great World War (World War I).

Today, the Cenotaph is a memorial to all who served and gave their all, in all wars, for their town and country. 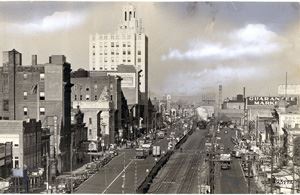 This iconic photo of downtown Passaic, was taken in 1938, exactly 25 years before the mainline Erie Lackawana Railroad made its last trip through Passaic. Then, there was two way traffic on either side of the tracks, known as West and East Main Avenue respectively. Downtown Passaic, was the place to be and was known for its shopping, restaurants, five movie theatres and just going for a stroll. 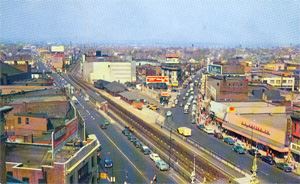 Downtown Passaic, in 1955, when there were five movie theatres with first run movies, numerous restaurants and smaller eateries that served it all, shopping that equalled New York City and a railroad that brought all the customers, shoppers and tourists right to your front doors! 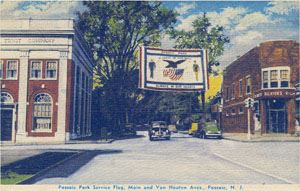 The intersection of Main and Van Houten Avenues, in the Park section of Passaic. This view is looking west on Van Houten Avenue towards High Street. The patriotic flag, hung across the avenue, tells us it was 1942 in the early days of World War II. On the left is the then, Passaic Park Trust Company, now Valley National Bank and on the right is the then Richter’s Drugs, then Wilbern’s Drugs and now Nina’s Variety Store. 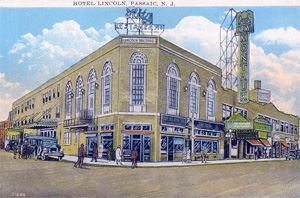 1925 photo of the (then) New Montauk Theatre, on Main Avenue. This entertainment palace replaced an earlier Montauk Theatre that catered mostly to Vaudeville. This theatre showcased live shows, silent and later, talking movies. Upstairs was the famous Ritz Ballroom, the location for important receptions and get-togethers.

Today it stands closed, a silent witness to a glorious past!